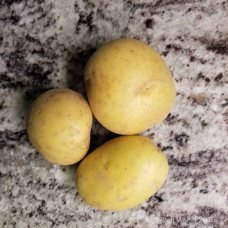 I just knew I shouldn’t have written about potatoes yesterday! Maybe it was in my head to do this already, but writing about it made it a certainty. I had spuds for dinner yesterday. Lots of them!

When trying to lose weight, one of the first categories of foods that fat people tend to drop is all the white stuff. Sugar, flour, rice & potatoes. While I’ve done that, & I’m sure I’ll do it again, it may not be necessary to do it all the time. Though not diabetic, I have one of those little glucose test meters. Every now & again, I’ll pull it out to test how my body is reacting to whatever my latest dietary penchant is. Usually, I’m doing it to prove I can safely eat more of something that I think I ought not to be eating. And spuds are one thing that I want to repeatedly prove that I can eat more of!

Most of the week, my glucose levels were between 5.1 & 5.5 mmol/l (92 & 99 mg/dl), even after meals. When I’m monitoring like this, my fingers look like pin cushions so I measured immediately after eating, one & two hours after eating, etc. That was still my range. Pretty good, eh! Yesterday, however, I boiled & cooled a huge pot of potatoes. I stuck them in the fridge to cool, in order to convert some of the starch to resistant starch (more on this another day). Then I pan-fried them, in the leftover grease from frying bacon (pasture raised this time), with an onion. Finally, I added a large pot of boiled Brussels sprouts to the pan. Along with all the herbs & seasonings. I ate dinner from the “bucket” that was the focus of my post from a few days back. I was stuffed. And I mean really stuffed. So what happened to my blood sugar level?

After eating, it was 7.2 (130 ml/dl) mmol/l. A little over three hours later it was 6.8 (122 ml/dl) mmol/l & this morning, it was 6.1 mmol/l (110 mg/dl). Those aren’t really awful, & they’re a little slow to come down for sure. Still, I prefer to be in the five point something range most of the time. I was, however, running low carb prior to this so maybe my body needs to get used to controlling carbs again? Hey, I like that concept … I’m going to feast on potatoes for the next couple of days to see if the glucose control improves! Whoohoo!

Oops! I forgot to mention something. I ate a large, oil & vinegar drenched, feta & tomato salad before the bucket of spuds. And someone might have left a bit of steak on their plate that I just had to have a taste of. In my defense, it was a grass-fed steak! And … about an hour after dinner … I had a big bowl of that raisin, nut & chocolate mix. With these really sweet, dried fig, mango & coconut balls. All covered in cream. I wonder if that did anything to the blood sugar! 🙂

I was also supposed to be on a one meal day fast, with dinner being the one meal. I guess it turned into three meals at dinner time. Is that okay, d’ya think!?!